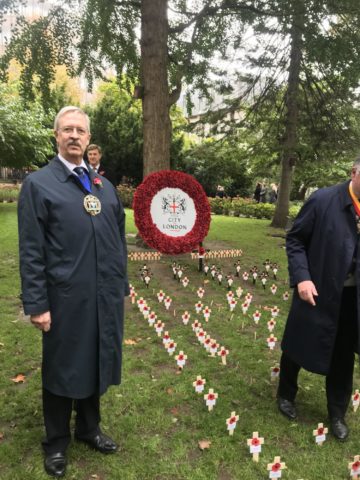 November commenced with the Annual Planting of Crosses in the Garden of Remembrance at St Pauls on Monday 4th, accompanied by our gallant and learned Clerk. A very simple, but moving ceremony.

In the evening I attended a Service of Celebration of the Lord Mayor’s year at St Stephen Walbrook, rebuilt after the Great Fire in 1672, by a parishioner, Sir Christopher Wren. This is the Lord Mayor’s Parish Church.

The Mistress and I were fortunate to be at the Installation on Wednesday, of the new President of the City Livery Club, Adele Thorpe, which took place at the newly refurbished Butchers' Hall. This Hall is very well known to many of us and has undergone major works, but retained the essence of the Hall and it’s trade.

On Thursday evening, the Mistress and I attended the 22nd Annual Ralph Anderson Memorial Lecture, sponsored by the Horners at the Royal Society of Medicine. This year Professor Dame Julie Higgins DBE FRS FREng spoke about, "Seeing is believing: why polymers bounce, stretch and stick". Although to a non-polymer academic, it was somewhat daunting, she explained how the progress that science made for our benefit, has resulted in re-cycling problems, which science is working hard and successfully to resolve. In other words all plastics are not all bad.

The final event of Lord Mayor Alderman Peter Estlin’s year in office was the Silent Ceremony on Friday, at Guildhall, when his successor, Lord Mayor Elect Alderman William Russell was sworn in, with the 20 minute ceremony conducted in complete silence apart from him pledging himself to the role of Lord Mayor. Any Liveryman can witness this historic ceremony by application via the City of London web site, usually in August.